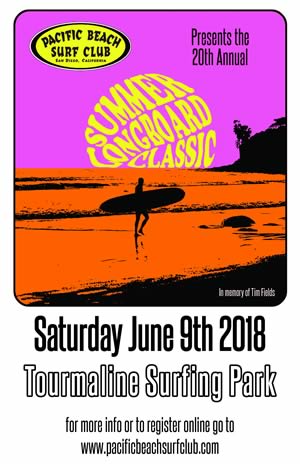 A Saturday To Remember!

Saturday, June 9th, 2018 was a day that won’t soon be forgotten by many local San Diego area surfers and onlookers alike. A clean little combo swell with plenty of sunshine and very little wind has been on the rise the previous couple of days, and after a sluggish and rather gray start to the weekend, by 9:00 a.m. that Warm California Sun has arrived and things are in full swing.

The competition kicks off at 7:00 a.m. sharp with two heats each of Senior Men (35-49) and (Regular, Young, Stuck Between Junior and Senior, or Just Plain Ol’ Men (20-34). Big ups to these guys for making some soupy, slightly sloppy conditions look like a green day on SurfLie. The only downside is that one of the deejays jumps the gun at 7:30 a.m. in a poorly thought out attempt to appease the “chainsaw through a Marshall stack” musical tastes of one of said young lions who was about to paddle out, and in so doing completely mangles the cool morning vibe for a while (and a full half hour before music is even legal!)

Things come back around soon enough though, and six of these brave wave warriors from each division live on to fight another day… err… couple of hours. Consensus is that a good time was had by all despite the still mucky waves.

Super Duper Women (50 and up) and Super Women (35 and up) follow, paddling out into evermore shapely and nicely defined bands of aquamarine wave energy. By now the coffee has kicked in and the crowd is growing steadily larger and more engaged. The momentary trepidation over June Gloom’s possible return is ever so slowly melting, and unwanted layers of clothing are being peeled off as the overnight breeze fades away. Hoots and cheers fill the air as the ladies are doing their thing. Perhaps the pure epicosity of the past two days really did happen after all! Was that a crack in the clouds I just saw, or are my eyes playing tricks on me?

While the women claw and scramble for the slightly improving waves out front, south of the contest buoy the Pumphouse has become packed with maniacal wave hounds charging and weaving their way through the inside foreign language section. Dave Hopper and RC are bobbing around in the cove just north of the contest area with Tourmo’s equivalent of 50 yard line seats, and onshore the deejays have found their groove while Spinner’s boy Carter is getting all jivey on the mic.

Soon there is so much going on that it’s hard to take it all in. Why doesn’t anyone film these things from start to finish? I wish I could watch it all again so I could say more here. Anyhow, hats off to the ladies who advanced!

The clock strikes 9:00 a.m. and the (Regular, Young, Stuck Between Junior and Super, or Just Plain Ol’ Women (20-34) are up next. Some of them momentarily resent the “Plain Ol’” moniker until it is made clear that it’s the moniker that’s “Ol’”, not them. Good laughs are had by all and some highly entertaining surfing ensues. Surfboards, wetsuits, and hairstyles are in synch, flash bulbs pop like fireworks, and in classic California style, a high percentage of quite talented blondes make it through to the finals.

At this point the combination of blazing sunshine, groovy tunes, and evermore dazzling surfing action has whipped the crowd into a fever pitch of zen chill. Things have gotten so hot they’re cool. One couple is overheard chatting at length about the eye popping maneuvers that only contest surfing on longboards seems to deliver: moments when whatever it takes to make the next section and finish the wave all the way to the sand - thereby gaining maximum points - bring out incredible feats of vision, balance, coordination, and most importantly of all, creativity. An old timer chimes in that back in his day that's how they used to ride every wave, every day, contest or not!

Half past nine means it’s time for Middle Aged Men, aka “Men Masters” (50-59) according to the official website of the hosts, the Pacific Beach Surf Club. I should get in touch with them about standardizing the division names. One minute it’s “Grand Masters”, the next it’s “Men Masters”, and before you know it it’s “Grand Master Men and the Furious Senior Citizens” or sumpin.

Anyhow in the right light and at certain angles most of these dudes (including yours truly) don’t look a day over 36, and sticks and stones and all that… so there! Besides, the waves by now are BITCHEN! I can only speak for myself, because you know how it is when you’re competing - nothing else matters, and you’ll gouge your opponents’ eyes out and hold his nappy ass head underwater until he starts gurgling if that’s what it takes to get that coveted piece of silkscreened plywood to set on your desk next to your pencil cup.

The horn goes off to start our heat and I quickly get my maximum of six waves with plenty of time left on the clock, just so I can spend the rest of our allotted time watching my brothers in arms doing their thing - and what a joy it is to share in your fellow man’s exuberance in front of a large crowd of appreciative and adoring onlookers! Amen!

Now if you thought the GMMFSC put on a show, b-b-b-baby you ain’t seen nuthin yet! You see, there’s this guy named Ron Greene, and he’s got this amazing silver hair otherwise you’d think he was even a lot younger and stuff, and yes he RIPS! Oh yeah, he’s also El Presidente of said Pacific Beach Surf Club, and his mere presence in the water is guaranteed to raise the level of surfing around him, just because holy crap can he surf circles around people whose gray hair days are way way off in the distant future!

And if you think Mr. Greene is the only one in Legends (60+) (no nicknames required, this name fits!) with such superman capabilities, well you’re wrong wrong wrong. Besides I’m only buttering him up a bit because it might get me places in the surfing world. Not that there aren’t plenty of lions out there on equal footing with him. Whitney Gould, are you kidding me? Bob Pierce? Pier Moore? The list goes on! I’d bet a box of donuts to a fat man that these guys have collectively ridden more waves with style and gusto than the rest of us combined! (All apologies to Skip Frye, add him to the mix and it's a done deal.)

As the morning hour crests into double digits the crowd swells, the free surfing outside the contest zone reaches a fever pitch, and Junior Men and Junior Women (15-19) take to the water with enough youthful exuberance to fill a coliseum. There is a certain “je ne sais quois” that only the combination of brightly colored jerseys, lots of sunshine, and youthful athletic prowess on display can deliver, and it’s all part of the larger process of creating A Saturday To Remember.

Looking up to these young men and women for guidance and inspiration are the “Menehune” boys and girls, ages 14 and under. The nascent talents and pure stoke of these young rippers are in full effect as they scratch and claw their way out through the breakers. The style and polish that will come with time and experience has for now taken a back seat to concentration on the fundamentals. Popups are something to get through quickly so that footwork can be measured out in advance of a planned nose ride or floater or head dip, and if it doesn’t work out as envisioned, there’s always another lifetime of waves ahead to get it right! Right? So rad!

It’s now approaching lunchtime and yet still you can set your raffle tickets down on the table with no worries that they'll blow away. Heck, I can remember years when we had to struggle to keep vinyl LPs from flying off the turntables by this time of day. Grousy grey misty lousy days. But not today, no sirree! It’s all about blue skies, good cheer, and Bob and Brando’s tasty vittles!

Early afternoon brings more of the same: an intoxicating mix of stoke, cheer, smiles, amazing surfing, skateboarding, and general tomfoolery. Finals are contested in some of the divisions, the aforementioned tomfoolery finds its way out into the waves in the Cat and Dog Heats, and still that dreaded wind stays away. Hallelujah!

Oh, and speaking of the raffle, HUGE thanks to Jim Ellington and Josh Hall for providing two eye popping surfboards, as well as all the other sponsors and donors shown below.

So that's it - signing off for now, see you next time!

*Finals are 20 minute heats all other heats 15 minutes. The Heats and Times are subject to change. Please be at the contest at least one hour before your heat. Thank you and good luck to all competitors!

Super Duper Women 50 and up: